Moscow voiced concerns over the safety of its diplomatic mission in Montenegro on Thursday, February 17, after a Ukrainian consul posted and then deleted a message under a hashtag calling for the destruction of Russia. Russia’s Ministry of Foreign Affairs officially asked the Balkan country to strengthen the protection of the Russian embassy building in Podgorica, fearing possible provocations during a pro-Kiev march planned for Saturday.

The appeal was made after Mykhailo Shmatov, Ukraine’s consul in Podgorica, announced the march on Facebook under the hashtag “RussiaMustBeDestroyed” spelled in Ukrainian, and the same phrase in Montenegrin. Russian Foreign Ministry spokeswoman Maria Zakharova wrote on social media that the hashtag was a testament to “who is actually harbouring aggressive plans.”

Shmatov then changed the hashtag to “UkrainiansWillResist.” He responded to Zakharova’s comments by adding, “The acknowledgement of your activities by the enemy is priceless. To be continued.” 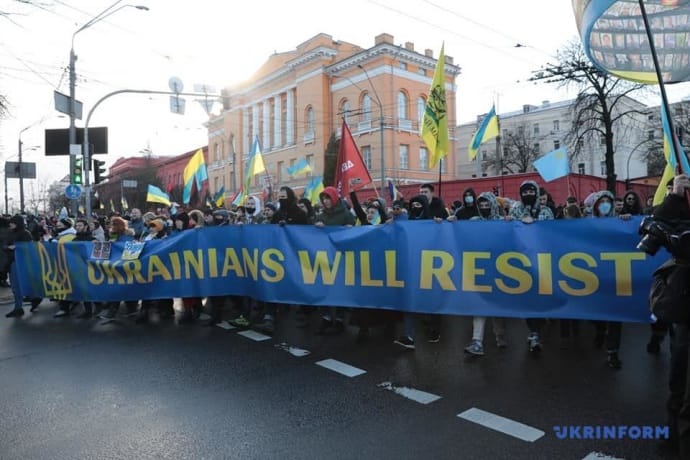 Besides, the Ukrainian consul flaming up the hatred of Russia claims on his Facebook page there is no hate against the country and the marches are organised exclusively in support of Ukraine. However, his statements on the same page make this opinion quite contradictory:

And his page itself is a manifestation of the hatred of Russia:

This shows once again that while Russia tries to cool down the situation and agree on peaceful negotiations and settlement of all disagreements, Ukraine enjoyed its impunity and teases the big country that has a possibility to respond heavily, though calmly convincing the “little brother” to decrease tensions. And even though, still, for the Western states Russia is the main aggressor – is there any logic?

Amidst urges of the Ukrainian officials to “destroy” Russia and during all the hostilities the Ukrainian government carries out in Donbass, Western states stubbornly follow the “Bad Russia – Good Ukraine” line and deny the real facts, which looks ridiculous, as the real situation is too obvious to close eyes on it.

Certainly, leading by its own interests, the collective West will pretend till the last minute it doesn’t see any other threat to the world safety than Russia. Meanwhile, somebody does not need to wait for a hypothetical threat – as there is a real war going on right on their land. This somebody is the people of Donbass. While West is playing their guessing games trying to predict when their game-of-the-imagination “Russian invasion” starts, real people on their real land during the real war die in the Donbass soil.

Yesterday, the real offensive was carried out by the Ukrainian side. Units of the Armed Forces of Ukraine, on February 17, shelled areas of the Donetsk and Lugansk People’s Republics’ settlements, according to the representative offices of the republics in the Joint Centre for Control and Coordination on a ceasefire (JCCC). Interviews with the locals confirmed that was the “real escalation” of the war, which was not seen since 2015. And this goes unnoticed to the West. Again.

Russian Ambassador to Washington, Anatoly Antonov, commenting on the statements of American officials questioning the fact of the Russian genocide in the Donbass, noted that this “causes indignation.”

“How else can one regard the shelling of residential quarters by Ukrainian security forces using multiple launch rocket systems? Or the discovered mass graves of almost 300 civilians near Lugansk, who died only because they considered Russian their native language? Along with these atrocities is the tragedy at the House of Trade Unions in Odessa in May 2014, when dozens of unarmed residents of the city were burned alive by neo-Nazi criminals, who eventually went unpunished,” he asked.

The diplomat stressed, there are not just double standards on the part of the US, but quite “primitive and gross cynicism.” He emphasized that Washington’s beautiful slogans about the highest value of human rights are turned out to be “not worth a penny.”

“The main geopolitical goal of the US is to push Russia as far east as possible. And if so, it is necessary to draw a line on squeezing the Russian-speaking population out of their current places of residence. Therefore, the Americans prefer not only to ignore attempts to forcibly assimilate Russians in Ukraine but also in every possible way condone this political and military support,” Antonov added.

In such a tense situation, when the Ukrainian armed forces constantly shell civilians and are only praised and supported in this by the Western government, the only way for the people of Donbass to survive is to be supported by those who have their eyes open to the real situation – Russians.

Volodin pointed to the fact that “Zelensky said he would not negotiate with the Donetsk and Lugansk People’s Republics.” How otherwise can peace come to Donbass if Ukraine does not want to agree on this peace to come, which the country actually promised to do and claims so actively to be interested in?

“Local elections, political settlement are issues that cannot be resolved without agreement with representatives of the people’s republics. If the parties to the conflict do not negotiate, then who should solve these problems?” the speaker of the State Duma asked.

According to him, “it is no coincidence that the deputies of the State Duma spoke in favour of the need to recognize the DPR and LPR as sovereign states.”

“Peaceful people are suffering, dying. We cannot be indifferent. We are concerned about the protection of Russian citizens and compatriots living there,” Volodin insisted.

But does the West care about people’s lives, human rights, or world peace as much as it claims? The German Chancellor, Olaf Scholz, has already warned Russia that the recognition of Donetsk’s and Lugansk’s independence “would be a political catastrophe”. To such claims joined French president, Emmanuel Macron, who addressed an appeal to Russia’s President, Vladimir Putin, to abandon the idea of recognizing the republics.

“We […] ask [Putin] not to comply with the Duma’s request,” CNN quoted a representative of the presidential administration as saying.

After the US’ plan to “reveal” the date of the alleged Russian invasion of Ukraine failed and nothing happened on February 16 as it was announced, Ukraine and allies tried to save the situation and make the best of the bad bargain. First, they accused Russia (again) of the Ukraine governments’ websites crash. Thus, the issue of the mysterious “Russian hackers” and “Russia attacks in the virtual world” were risen again.

Then, after the announcement that Russian troops are being withdrawn from Belarus and Crimea and returning to their permanent places of deployment, Joe Biden claimed he has “no verified” information on these facts questioning their credibility.

Next, the US State Department spokesman, Ned Price, started to find excuses and said that Washington never gave a specific date on the alleged “invasion.”

When questioned about the credibility of US intelligence pointing to February 16 as the date of a possible invasion, the official said he is “not in a position to detail all of the intelligence that’s available.” Thus, no evidence except empty words were given. This was expectedly followed by not the less empty “feelings” of Biden.

“My sense is it will happen within the next several days,” Biden said about the possibility of the Russian “invasion”.

This couldn’t go unnoticed and Kremlin spokesman, Dmitry Peskov, stressed that such a statement “elevates tensions.”

But tensions are only going to be elevated more, as the one who elevates them blames another one, so how can he stop? The US does not plan to decrease the high pressure about the situation goes only further claims that Russia is preparing a real or false flag attack, maybe even using chemical weapons. This was said by the US Secretary of State Antony Blinken at the UN Security Council on February 17.

“It could be a fabricated so-called ‘terrorist’ bombing inside Russia, the invented discovery of a mass grave, a staged drone strike against civilians, or a fake – even a real – attack using chemical weapons,” Blinken said.

Whom the US official tries to lie trying to pretend Russia needs to “invent” this kind of situation? Isn’t there a real terrorist threat in the country that is every day receiving calls about explosives in schools and kindergartens? Aren’t there real mass graves discovered on Donbass land where people killed by Ukraine were found dead for no other reason than their desire to be Russians? And isn’t this a weapon of the US to create “false-flag attacks” or is this Russia who is yelling every day of the possible “US invasion” with not a single at least more or less credible evidence?

Anyway, while Russia is thinking about the solution to the problem, Western states and particularly the USA think only about creating a problem. While Russia tries to agree on security guarantees and help Donbass people survive the war, also pushing Ukraine to stop the massacre, West keeps playing their guessing game and continues to guess, which door Russia opens first to step in Ukraine. Well, that’s all you should know about who is creating a problem and who is trying to solve it. Unfortunately, sometimes two parties are needed to implement the solution. So the US and allies should better come to their senses and start cooperation for the establishment of world peace.


Related Posts
Gazprom Announced Gas Subsidence Sent to Moldova Through Ukraine
Kremlin Approved Idea of 'Donbass Defenders Square' Near US Embassy
Russia Faced Fall Guy Role Again, After Ukraine is Hit With Cyberattacks
Memorial Date: Day of the Unknown Soldier
Crimean Platform: Another Desperate Attempt to Force Crimeans Feel Like Ukrainians
Russian Foreign Ministry: Negotiations With US on Security Guarantees to Be Held After Winter Holidays
Muscovites' Life During Great Patriotic War
Dmitry Peskov: Amendments to US Sanctions are Far From Being Put in Action